Maluda, the story of a mysterious huge natural rift valley, surrounded by impenetrable mountain ranges, bombarded in the distant past by meteor showers containing alien micro organisms, and stumbled upon by an ancient nomadic tribe, now locked into the valley by nature’s barriers.

The micro organisms have merged with the flora and fauna of the valley to produce……………as may have happened in other places on planet Earth.

Two young people combat the mysteries and horrors of the Valley.

Travels Through My Mind

Autism, Tourettes Syndrome and Schizophrenia, an impossible trio to successfully combat. David tried manfully for 35 years until he decided enough was enough.

A book of short stories by Dave Early.

During his short life writing became a positive way, through intense concentration, to blot out the constant and never ending voices occupying his mind. Voices he could not dispel no matter how hard he tried.

David travelled extensively throughout the globe always searching for the peace he desperately yearned. His travels assisted his story telling and putting his experiences down in the form of short stories (although some not so short) gave him some respite from his troubled mind.

This book is the first, with others to follow, that will be the family tribute to a quite remarkable mind.

The beginning, THE PROLOGUE, is David’s own words, explaining that on his tenth birthday “in the blink of an eye” he realised that he was different from the rest of us.

More Travels Through My Mind

Autism, Schizophrenia and Tourettes were my challenge.  My stories are my response to that Challenge.

This is David’s second book of short stories. The stories are, in the main, conversation pieces, snippets of life or glimpses of his personal experiences. They have been interspersed with stories from an active mind.

One or two of the stories rely on the imagination of the reader rather than the provision of an orchestrated ending.  Perhaps when reading the stories, a step into David’s shoes may provide the insight necessary to appreciate them.

The PROLOGUE is an article written by David and is his tongue in cheek, cynical view of modern society. 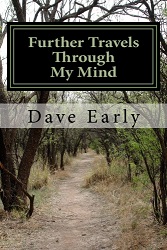 Further Travels Through My Mind

I was young once … and Autism has sharpened the memory.

This is the third book in David’s series of short stories.

They comprise snippets from his personal life, conversation pieces, anecdotes and social observation.

The prologue, written by David himself, in verse format, is indicative of his mindset, probably as a result of his Autism. Perhaps readers with similar problems may recognise the futility of existence that he sometimes felt and may also recognise the need to overcome those feelings and accomplish the best they can, for posterity.

My Writing Helped To Ease My Pain
… My Journey Continues

David often signed off his communications with, “I’m smarter than the average bear”.

Perhaps this view is taken by others who are afflicted with Autism. I say “afflicted” in a guarded sense.  One could take the view that those with autism are the future “norm” and the rest of us are a little lower down on the evolutionary scale; who knows?

Or perhaps David really was “smarter than the average bear”; it is left to the readers of his stories to judge.

It is generally documented that many who have been diagnosed with autism also possess amazing abilities in, mathematics, art, science and other skills, abilities that are far beyond the rest of us “the average bears”.  One day we will know the truth.

David’s inner thoughts often came out in his poetry or prose, for this reason the prologue for this book and those for the next two books will be selected poems that may provide an insight into the stories that follow the prologue.

The Journey Nears Its End …

A Book of short stories by Dave Early

This is the fifth book in David’s series of short stories.  As in previous books David has drawn the subject matter of each story from personal experience.

In many of the stories it may be possible for the reader to sense the difficulty that a person who suffers from autism has in describing personal feelings.  They are probably different from those experienced by you and I.

The PROLOGUE that follows this preface is a poem called “THE UNDERPASS’ written by David, the sentiments in the poem may help your understanding.

They say that there is at least one book in everyone; I’m hoping that for me this is the first of many. Artistes publish their memoirs presumably as a record of their life to leave behind, so that they are not forgotten; and so it is with anything that I write now or in the future.

Language is at the very heart of civilisation, it is the way we communicate, and all written material is the method we use to record knowledge and teach the next generation. Not that this book will teach anyone anything, although in my defence I would add that some of the stories do contain facts that are not commonly known.

This is merely a book of short stories that have been written to entertain the reader by creating tales that have an unexpected ending. Hence the title of the book.

The challenge for the reader is to guess the end of each story before reaching the last page.

Is There Life After Death

From time immemorial man has searched to discover the meaning of life and death. We have all asked the question “why”, a question that so far remains unanswered.

Humankind is constantly evolving, learning more about the Universe and how it works, with every generation. Whether we will ever be able to understand its complexities fully is a conundrum that may never be answered.

However the idea that human life is merely nature’s way of continuing the species, and has no further meaning, is constantly being challenged.

Horror in the Village

The River Alfield meandered lazily through the English countryside. Along its banks were a small town, a village and a hamlet, the three were linked by the river and by the parish church, St. Luke’s.

Nothing ever happened in the parish to disturb the peace; crime was minimal, gossip was the local pastime and life drifted on at its own pace. That is until a series of horrific murders traumatised the local population.

Detective Inspector Peter Johnson and his partner Detective Sergeant Paul Sangster were called in to investigate; but solving the crimes proved to be problem ALFIELD.

Kings & Queens of England in the 10th Century

But only one could ultimately rule over all the land, only one could shed enough blood to drown the others. Death was treated with contempt, it had no meaning, it was a sacrifice everyone was willing to make, in order to achieve the ultimate aim; VICTORY.

The century threw up heroes, men of immense bravery, men of courage and fortitude, men who would become legends. The century was littered with monarchs who threw themselves into the fray for the chance to be the overall, KING OF ENGLAND.

This book is a story of the Rulers and of their Protectors, the time lines are accurate, the kings and queens are real, their personal experiences are possible but not recorded as are the stories of their protectors.

Tales of Bronfield Forest: Benny the Badger and Cheeky the Squirrel

Bronfield Forest is a large forest of Beech trees, with a pond on one side and a stream trickling gently through the trees into the pond.

Many animals, birds and their families live happily in the Forest, either in nests high up in the branches of the trees, or on the ground in burrows and tunnels.

In this Book 1 of The Tales of Bronfield Forest are the stories of two of those animals:

Benny the Badger and Cheeky the Squirrel.

Bronfield Forest is a large forest of Beech trees, with a pond on one side and a stream trickling gently through the trees into the pond.

Many animals, birds and their families live happily in the Forest, either in nests high up in the branches of the trees, or on the ground in burrows and tunnels.

In this Book 2 of The Tales of Bronfield Forest are the stories of two of those animals:

Henrietta Hedgehog and Tommy the Toad